On March 13, 1979 the New Jewel Movement (NJM) seized power from the corrupt and brutal Eric Gairy, Prime Minister of Grenada. The Grenadian people had, through the NJM, made it clear that education was a priority. Following the Revo’ the newly created Peoples Revolutionary Government, led by the NJM, appointed Jacqueline Creft as the Minister of Education to bring about these momentous changes. Over the 4½ years of the Revo’ the campaign for a proper education led to the successes outlined below.

Economic growth contributed to significant changes in education policy. It made possible an increase in spending on education as well as creating a demand for workers with higher skill levels. It was quickly clear that without improvements in education, economic progress would be retarded.

Under Gairy, education was unchanged from the days of Empire, based on a Eurocentric model calculated to demean the history of the people of African and East Indian heritage, thereby undercutting their self-confidence.

Most primary schools were in a dilapidated condition. There was little secondary school provision, with fees that placed it outside the grasp of the overwhelming majority. There was one teacher training college that only catered for 50 students a year. A majority of the island’s 600 teachers were unqualified and there was a high proportion who were either time servers or, having what was known locally as a “visa mentality”, saw their involvement in education as a route off the island. This meant that local people bore the cost of training teachers who then took this investment to the metropolitan countries – a sort of educational neo-colonialism, foreign aid in reverse.

To quickly address the need for teacher training, the National In-Service Teacher Education Program (NISTEP) was devised, with the help of Chris Searle from England and Paulo Freire from Brazil. It was probably the most ambitious programme of teacher education ever undertaken in a Third World country. All unqualified teachers were given a three-year in-service course that expected them to attend training sessions every Friday, while skilled workers and community leaders provided work-related education in their absence.

In June 1980, the full-time teacher training college programme was suspended and all resources were diverted to NISTEP, although this was amended to allow 40 teachers with 15-20 years’ experience but no qualifications to pursue a one-year full-time course of study.

The sheer ambition of NISTEP produced a sceptical response from many of the external examiners from the University of the West Indies (UWI), who were particularly opposed to the inclusion of all teachers including those who did not have the normal prerequisite examination passes to have been admitted under the old scheme.

These reservations did mean that the NISTEP qualification was only fully recognised in Grenada as UWI was reluctant to endorse the resulting qualification, although a compromise was reached whereby those who did have the necessary four O-level entrance requirement were permitted to take the regionally accredited examinations. There was also some resentment among the unqualified teachers at the compulsory nature of the scheme and the high workload it involved with the result that a significant number of teachers left the profession completely.

Despite these reservations, the Ministry of Education decided to make a start and deal with the problems as they arose, reasoning that the children of the island had waited long enough for a proper education system and that requiring all teachers to be properly trained was an essential prerequisite. Of the 380 teachers who stayed the course, the overwhelming majority were successful, having shown a high level of commitment and enthusiasm. Many teachers threw themselves into developing the new curriculum with vigour and, while not an overwhelming success, standards improved greatly, new schools were built, a new set of primary school readers were produced and lessons were learned about teacher training that pointed a way forward. If we compare the school leaving exam pass rate, it went from 3 per cent in 1978 to 32 per cent in 1982.

While not all teachers participated in NISTEP with any enthusiasm, it may be argued that those who did gained greatly in professional abilities and their student’s education prospered. To help create the infrastructure in which education could prosper, state spending on education was increased markedly so that, in 1982 for instance, the education budget at $17m represented 23 per cent of the budget. This enabled a school repairs programme, in part implemented by community voluntary labour, and the opening of another government secondary school, the first new one in 100 years. To enable more students to attend this increased secondary provision, fees were halved in 1980 and abolished in 1981. As for higher education, the debts of the Gairy government to the University of the West Indies were paid in instalments so that Grenadians could again enrol. Add to this the scholarships offered by Cuba, USSR and East Germany, and by 1982, 300 students were attending higher education institutions compared with only three in 1978.

The aim of the educational policy was to counter the past educational neglect of the majority and produce an educated and politically aware working class, integrating education into the Revolution’s social, political and economic goals. Countering the previous pro-imperialist education was, of course, political, and this was condemned by enemies of the Revolution as “propaganda”, as if the previous system that extolled the virtues of an outdated British Empire, instilled the values of free-enterprise capitalism and only catered for the needs of a small elite was not in itself “political”.

Part of the work of NISTEP involved young teachers in the development of the curriculum of which the most successful innovation was the production of new series of early reading books called The Marryshow Readers, named after the famous Grenadian anti-colonialist of a previous generation. These drew on the lives of ordinary working families in Grenada for their subject matter, a marked contrast to the previous offering that had dwelt on the lives of middle-class children whose daily experience was far removed from the lived experience of the overwhelming majority of Grenadian families. They made a conscious effort to counter the sexist portrayals of the traditional early reading material. Their educational innovation was to teach Standard English as a second language to native Creole speakers. They were produced in sufficient numbers as a contribution from the Cuban government to enable every primary school child to have their own copies, a welcome break from previous practice. It is perhaps a back-handed compliment to these small books that one of the first acts of the “Interim Administration” was to withdraw them and return to the old “Janet and John” model that extolled bourgeois values and role models.

Undermining old attitudes was not just the work of those educating the young. The Centre for Popular Education (CPE) started as a literacy programme in August 1980, but soon became much more, incorporating songs, poetry and dance in its approach, to both instruct in terms that ordinary people understood and to enhance the self-belief of a people who had been seen themselves undermined by hundreds of years of colonialism and neo-colonialism. It was an important source of intergenerational solidarity as the young taught the elderly to read, while at the same time learning much from the traditional wisdom of their elders. Fifty-eight per cent of the CPE students were women, while women also made up a significant proportion of the volunteer teachers. Illiteracy was reduced from about 20 per cent to less than 3 per cent of the population. From 1982, phase two branched out into Maths, English History, Politics and the Natural Sciences as a form of post-literacy programme. But above all, the distinguishing feature of the programme of the Centre for Popular Education has been its emphasis on popular participation, so it not only increased people’s educational achievements, it also encouraged the use of often unrecognised existing skills in the building of the new society.

In the years since the overthrow of the Revolution, there has been considerable criticism of the education system in Grenada between 1979 and 1983 and indeed they did not achieve all that they intended. However, given the parlous state of the school system under Gairy and the ambitious programme they set themselves, the considerable improvements that occurred during the Revolution are quite remarkable in the context of a small, impoverished, “Third World” island and put many richer nations to shame.

Chris Searle, a British educator, poet, anti-racist activist and socialist. He has written widely on cricket, language, jazz, race and social justice, and has taught in many countries including Grenada.

Paulo Freire was a Brazilian educator and philosopher who was a leading advocate of critical pedagogy. He worked as a special education advisor to the World Council of Churches, during which he acted as an advisor on education reform in several former colonies and Grenada.

These factsheets are a summary of some of the gains of the Revo’ and are designed to inform current and future generations of its successes. Please download, read and circulate. If you have any comments please contact the author, Steve Cushion at info@grenada-forwardever.net. 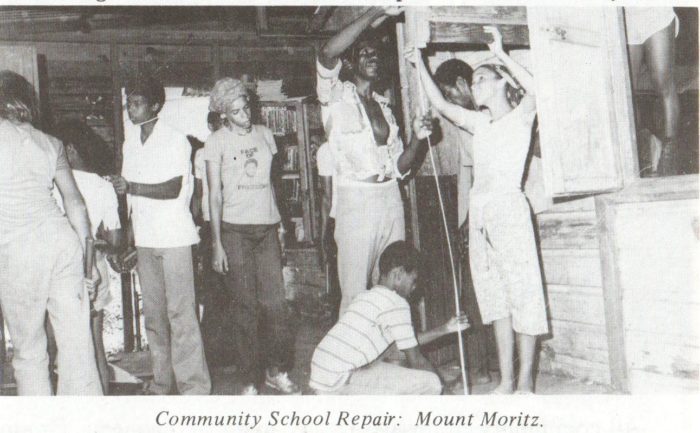 Join the Grenada-Forward Ever mailist.  Please complete and submit the form below.