A Journey with Bernard Coard

On 4 November 2021, Bernard Coard was in conversation with Dave Neita, a lawyer, published poet, lecturer and international public speaker.  This was a follow-up session to the launch of the 50th-anniversary edition of How the West Indian Child is Made Educationally Sub-normal in the British School System.

That groundbreaking study, first published in 1971, provided an understanding to Caribbean and working-class parents of the obstacles they faced in the limited educational opportunities open to their children. It led to them engaging in resistance against this system through a variety of self-help and other means.

The 50th-anniversary edition launched in March 2021 to enthusiastic reviews and was a historic milestone, continuing from the original publication.

Under the theme, “What has the last 50 years taught us since the publication of ‘How the West Indian Child …?” Bernard and Dave engaged in a highly informative discussion on issues such as how parents have responded since then, what they must do now, what forms of struggle can be used by black and white parents to develop an effective model of education for their children and how they can mobilise social capital, amongst other things.

The November event was recorded by our collaborators, the solicitors Leigh Day, and is now for available viewing and downloading from https://bit.ly/2Z003o8 or https://www.youtube.com/watch?v=2l4Pw7mUqlc. 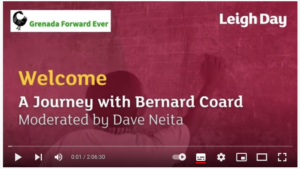 Q&A – A Journey with Bernard Coard

Numerous participants have put questions to Bernard Coard over the two events.  He will respond to these, saying to one: –

“…A)…1.  Yes, I plan to eventually publish the 12 points for teachers/educators/parents; the 4 points on Learning Process Focus and Prioritization; and the 6 objectives for school systems: Supplementary Schools, Alternative Schools and even the State School System (if they can be persuaded to adopt them) that I outlined last night…

Bernard Coard’s answers will be published.  For further information please refer to  info@grenada-forwardever.net.

Bernard Coard is the author of How the West Indian Child is Made Educationally Sub-normal in the British School System, first published in 1971.  On completing his studies at Brandeis University, in the USA, and Sussex in the UK, he lectured at the University of the West Indies.

He was an original member and principal organiser of the New Jewel Movement (NJM) of Grenada. In 1979 the NJM seized power from the brutal, corrupt and vicious dictator, Prime Minister Eric Gairy.  The Grenada Revolution brought significant change and benefits to the people of Grenada and ushered in an era of pride for the Caribbean.

During that period Bernard Coard was Deputy to Prime Minister Maurice Bishop, the leader of the Revolution.  He was also Minister of Finance and Trade and oversaw changes to the way in which the people of Grenada were involved in setting the country’s annual budgets and how resources were utilised in their communities.

In 1983 a catastrophic dispute within the NJM led to the collapse of the Revolution and the killing of Maurice Bishop and others.  A few days later the United States invaded Grenada with overwhelming force and after a few days of heavy fighting captured the country.  The invading forces then established, what continues to be referred to as, a “kangaroo” court and placed the surviving leaders of the Revolution, Including Coard, on a show trial.  They were deemed guilty by this irregular court and sentenced to death but after a vociferous global campaign, the embarrassment of the irregularities in the trial resulted in the US and their local agents commuting the sentences.  However, the political prisoners were subjected to 26 years in jail.

Since his release, Bernard Coard has contributed to Caribbean education, written extensively on the economy and recently reviewed and added to How the West Indian Child… leading to its republication in early 2021.  He hopes that the follow-up will create an environment that will lead to black and white parent being able to gain greater control of their children’s education, in what he sees as an even more centrally controlled environment.

Dave Neita is a lawyer, published poet, lecturer and international public speaker specialising in law, cultural leadership, social change and the arts.  An advocate for human rights and an expert in organisational development and mental health.

Dave has worked with NASA, HSBC and Oxford University, to name a few institutions.  He has delivered a sermon at St Paul’s Cathedral and continues to speak widely in churches in the UK and abroad, promoting a redemptive and inclusive message and promoting reconciliation and harmony.

Nominated for Lecturer of the Year, Dave has been lecturing in Health Policy and Practice for a decade and in 2018 he delivered lectures on Comparative Mental Health at Howard University, Washington DC, USA.

Dave has an MA in Cultural Leadership, volunteers his time in the community and served as the UK ambassador for the European Year of Equal Opportunity. He was included in Black Enterprise’s list of the Top 10 most powerful black men in Britain and was selected by the BBC to provide perspective and comment on the 50th anniversary of the March on Washington.

Known for his success as a member of the legal team behind a class action suit against a major multinational corporation on behalf of thousands of injured South Africa Miners, Dave continues to work as an advocate for marginalised people in society.  In 2019 Dave participated in, and won, the Cambridge Debate (oldest debating society) at Jesus College, Cambridge University.

As a patient advocate and art consultant for the new facility for Broadmoor, the largest, most well-known mental health institution in Europe, Dave has spearheaded the dialogue around race, art, identity and healing in mental health between patients, staff, architects and artists.

Dave is currently touring the UK with his art installations in tribute to the Windrush Generation.

This was recorded by Leigh Day solicitors.  If you have any queries please contact Dennot at Grenada -Forward Ever, info@grenada-forwardever.net.