Challenging the US Narrative About Grenada – October 19th 1983

Everyone knows the story. Now hear the facts

Challenging the US Narrative About October 19th 1983 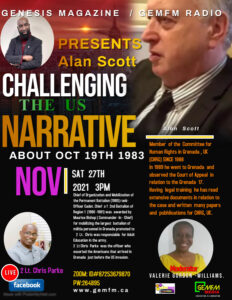 On the 19th October 1983, Maurice Bishop, leader of the Grenada Revolution and the New Jewel Movement (NJM); Prime Minister of the Peoples Revolutionary Government of Grenada was slain on Fort Rupert, St Georges, Grenada.

His killing occurred following a series of disastrous series of decisions that ultimately led to the collapse of the Revolution.  Since then the US Government, whose armed forces invaded Grenada within a few days of Maurice Bishop’s death, have assiduously propagated a simplistic narrative that painted the NJM as a hard-line organisation that turned against its leader.

This story has been widely accepted by a variety of audiences ranging from progressive comrades; those born since 1983; and anti-progressive individuals and organisations.

Challenging the Narrative will present the facts relating to what led to the tragic events of October 19th 1983. Join Valerie Gordon-Williams, the moderator, who was closely involved in many successful projects of the Grenada Revolution.  She will introduce Chris Parke, an officer in the Peoples Revolutionary Army, the army of the Revolution, and a candidate member of the NJM, who was present during this momentous period.  Hear what he observed throughout 1983 and the events leading up to October 19th. Also on the panel is Alan Scott, a member of the Committee for Human Rights in Grenada – UK.  Alan Scott has been closely involved in objectively assessing the events of October 1983 and the United States’ efforts to control the narrative.

Attend, participate, question and form your own views.

Challenging the US Narrative On Grenada

This short video illustrates the key moments leading up to the collapse of the Grenada Revolution. Download from here: https://bit.ly/30TMtDz or at https://www.dropbox.com/s/fna5z9is3tz6kfm/19th%20October%201983.m4v?dl=0.

Please view and come to your own conclusions.

If you wish to have more information please contact chrguk@sky.com or info@grenada-forwardever.net.