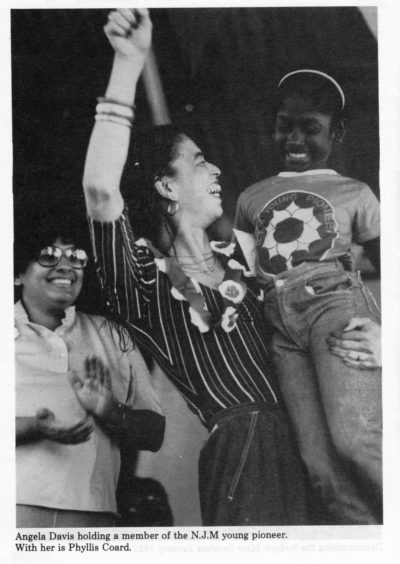 in the Chair: Jean Tate, drumming by Brother Omowale

Readings from the recently published “Unchained: A Caribbean Woman’s Journey Through Invasion, Incarceration and Liberation” by Phyllis Coard

The Grenada NWO was led by Phyllis Coard who was tasked by Maurice Bishop, the leader of the Grenada Revolution, to build the organisation from scratch. Led by a team of outstanding women, over one-third of all Grenadian women joined more than one hundred NWO groups throughout the country.

In the short 4½ years of the Revo’ the NWO achieved huge gains for women including equal pay, maternity leave, free milk, day care facilities, free school meals, books and uniforms, abolition of school fees, expansion of free secondary school and university places, housing for poorer families and the expansion of employment. Advances made during the Revo’ are still in place today.

Phyllis was the only woman among the “Grenada 17” (mostly members of the Revolutionary Government) who were captured by the invading US troops in October 1983 when the Revo’ tragically collapsed. The CIA mounted a COINTELPRO campaign most heavily targeted against her. Following a US organised show trial – condemned by Amnesty International – at the end of which 14 of the 17 were sentenced to death, she was kept in total isolation for over seven years, during which she was beaten, tortured and globally vilified. She was in prison for a total of 17 years in terrible conditions. The G17 were all finally released after a massive international campaign. Phyllis returned to her native Jamaica.eventbrite

This event is part of the International 40th anniversary of the Revo’ and International Women’s Day celebrations and will pay tribute to Phyllis Coard for her heroic work in the struggle for women’s rights and her survival of all the US could throw against her.

Phyl is in very poor health currently, and for this reason is unable to make the trip. Instead, recordings made by her sister from “Unchained”, her soon to be published prison memoirs, will be played at the event and pre-orders for the book will be taken. Speakers include Bro Selwyn Strachan, Minister for Mobilisation in the revolutionary government and one of the Grenada 17. Also a bookstall, music and a slideshow of the Revo’.

Jaqueline is an Immigration and Asylum lawyer and Lecturer. She is founder of the Organisation for Migration Advice and Research think tank and Windrush Action, supporting over 400 victims of the Windrush scandal.
Jacqueline was a student in Grenada during the revolution until leaving the island in November 1981. She was a member of both the National Youth Organisation and National Women’s Organisation and participated in the Centre for Popular Education programme.

Patsy, born in the UK to Grenadian parents, formerly worked in finance, is an experienced community organiser involved in many grassroots national campaigns, with aims to improve the life chances of the most vulnerable people in our society.
Patsy was called to traditional politics and became a Political Advisor to a Shadow Minister of Parliament and worked in Jeremy Corbyn’s office for the 2017 General Election during the campaign.
From dedicated commitment and hard work, Patsy is now a Councillor in Croydon, as Deputy Cabinet Member for Finance and Resources, after being former Deputy Cabinet Member for Family Health and Social Care and the BAME Champion for the whole borough after just being elected in September 2017.

Selwyn ‘Sello’ Strachan was born in Grenada and was one of the founders of the New Jewel Movement (NJM). He was also one of the victims of Bloody Sunday, in November 1973.
In 1979, he edited the newspaper ‘New Jewel’ with a circulation of 10,000.
Selwyn Strachan was one of 14 persons named to the Provisional Revolutionary Government (PRG) appointed Minister of Communications and Works and Labour. During this tenure, he addressed the 35th Session of the UN General Assembly in October 1980.
In August 1981 Strachan was appointed Minister for National Mobilisation.
After the Illegal US-led invasion of Grenada, on 25th October 1983, Selwyn was captured four days later by US forces and incarcerated at Richmond Hill Prisons.
Despite being incarcerated for almost 26 years, following a US financed show trial, in 2000 Strachan gained a postgraduate diploma in English Commercial Law from the University of London.

Brother Omowale is author of 8 publications (books and booklets) – expected to reach 11 by the end of 2020. Based in London, England he is a longstanding committed Pan-Afrikanist activist/organiser.
Founder the Pan-Afrikan Society Community Forum (PASCF), Ukombozii and the Marcus Garvey Annual Memorial Lecture, he is committed to the restoration of justice for Afrikan and other oppressed people of the world and has been involved in student and community activism since the 1990’s.

in the Chair
Jean Tate

A supporter of the revolution both in Grenada and the UK. Member of 2 NALGO delegations to Grenada including official visits to sessions of the Appeal Hearing of the Grenada 17. Chair of Committee for Human Rights in Grenada since 1988. Human Rights activist and organiser.