From the arrival of the French “pirates” in 1649 to the Revolution of March 13th 1979 the people of Grenada were held in some form of enslavement or bondage. In 1833 slavery was “abolished” in Grenada. For the majority its African descendants their status did not change for they were held in a form of servitude. Likewise, the indentured East Indians, recently arrived in Grenada to be the new labour force following “abolition, were also under a form of bondage.

Although ostensibly “free” Grenadian were held in a form of “enslavement-lite” up to and including the Gairy period. With the Revolution, Grenadians could be described as finally being free. The question faced by Grenadian was what form this new democracy was going to take.

The New Jewel Movement (NJM) radically change the way Grenada was governed and how its people could best effect the direction of their future. The thinking was that politics involved decision-making about resource allocation. As such, they did not believe that the process should be an “exclusive club”, located in the St Georges Parliament, comprising the rich, powerful and well-connected, to the exclusion of the remainder of the population.

The factsheet outlines the changes proposed by the Revolution. Although some elements of the proposal were effected during the Revolution it was a tragic irony that during the September 1983 period of crisis the NJM failed to use these as a route to resolving the issues faced within its leadership. 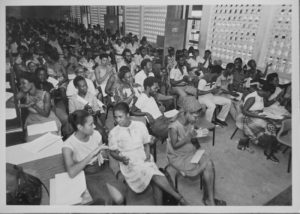