Over thirty years ago the United States invaded Grenada, following the killing of the leader of the Revolution, Maurice Bishop and others.  Their stated aim was to protect American students who were attending a private medical school in the country.

Their real objective was to ensure that the Revolution was quashed, following its collapse caused by the death of Bishop. To ensure that it did not return they placed the remaining leaders of the Revolution on trial for the murder of Bishop in a specially constituted court, with hired judges, a foreign prosecution team and existing judicial officials replaced by foreign hirelings.

In 1986, fourteen former members of the Government of Grenada and three soldiers, known as the Grenada 17, were convicted for the murders of Prime Minister Maurice Bishop and several others.

The trial was condemned then as a show trial and continues to be so described.  Ramsey Clark, the former United States Attorney General, and Amnesty International have both deem the trial to be unfair, with the latter stating: –

“…Amnesty International believes the trial of the Grenada 17 was fatally flawed and did not meet international standards…” https://www.amnesty.org/en/documents/AMR32/001/2003/en/

Amnesty International classified the Grenada 17 as political prisoners.  Since then those involved in Grenada-Forward Ever and a considerable body of others have called for justice for Maurice Bishop, those killed with him and the Grenada 17.  That is the overwhelmingly accepted position.

However, in light of recent comments in the Grenada press regarding the Grenada 17 and their role in the death of Maurice Bishop and others, we are rep 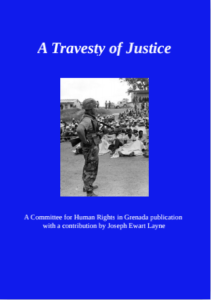 roducing a contribution by Joseph Ewart Layne, one of the Grenada 17,  to a CHRG publication ‘A Travesty of Justice’, which was first published in the UK in 2003.

Many Grenadians are still unaware that at least 10 of Defendants in the trial of the Grenada 17 were convicted solely on the uncorroborated evidence of just one witness,  Cletus St Paul. As the trial judge advised the jury, that without this evidence they could not find the Defendants guilty.

This article from Joseph Ewart Layne shows that the evidence given by Cletus St Paul, far from simply being uncorroborated, is actually contradicted by virtually every other prosecution witness. The Defendants were not legally represented at the trial, and so the trial judge was under an obligation to advise the jury of this contradiction in the evidence in his directions, but our understanding is that he failed to do so.

This issue should have been resolved in the subsequent appeal, but the judgement of the appeal court has never been published, though there is clear evidence that it was written. We appreciate that this is a very emotive issue for many, especially for those who lost loved ones on the Fort, but we ask you to suspend your position and read this document with an open mind, as we believe it destroys the credibility of the prosecution case against the remaining leaders of the Grenada Revolution.