“He should haul his ar?*.  He mus’ think we all chuppidy”, was the retort from a Grenadian in the UK to the news that Naguib Sawiris, the largest hotel property owner in Grenada, is lobbying the Keith Mitchell government to privatise its lone international airport, the Maurice Bishop International Airport, to him.  Such was the furore at this statement made in late April that all sides of Grenadian society, both at home and abroad, expressed their opposition to this prospect.

Grenada – Forward Ever has supplied a background to this incident and a statement deploring such a move.

On the 21 April this year Mr Naguib Sawiri, a billionaire with commercial interests in Grenada, delivered a presentation to a panel of Grenadian business executives and others at the ground-breaking of his second hotel development.  Amongst the audience was the Grenada Prime Minister, the Right Honourable Keith Mitchell.

During the presentation, he lobbied the Prime Minister to privatise the MBIA, which received loud applause from the audience.  However, in launching this proposal he did so in a manner derogatory to the people of Grenada and the MBIA staff in particular.  The Grenadians who saw and heard the recording of Sawiri were outraged at his arrogant manner and the insulting way he treated the PM. “Him make the PM look like he was talking to a little chile’” said one Grenadian.  Another, Kay, said, “…I mean to go so far as to say you will fire those who don’t greet guests with a smile and wanting to privatise what little Grenadian still have left in there (sic) name…”.

Matters were made worse by the fact that the PM appeared timid in his response to Sawiri’s outpourings, in not rising to defend Grenadians and MBIA workers.  Despite denials that MBIA was for by senior members of government including Tourism Minister Clarice Modeste, Grenadians were sceptical of these rebuttals.  Ms Thomas  said, “First of all, I want to state the obvious. This is a private businessman and he was voicing his own opinion at a session…He was expressing his personal opinion at that time and Government has not discussed that. Government has no intention of doing so at this time…”

Of course having “…no intention of doing so at this time…” is not a denial.  This lack of certainty by Government in the light of the heavy losses being made by MBIA During the period of COVID has not calmed the rumblings of concern caused by Sawiri. 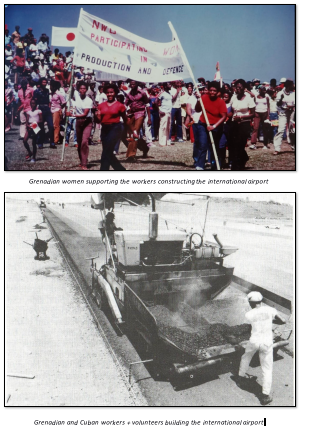 Statement of Grenada – Forward Ever

Grenada – Forward Ever (G-FE) recognises the tremendous social, economic and educational progress made by the Grenadian people during the Revolution of 1979. Amongst its objectives is to provide assistance to organisations and individuals in Grenada and elsewhere, seeking to advance the material, economic, social and general well-being of the people of Grenada in support of the advances made during the Revolution.

We are aware of the patronising and offensive comments made by the businessman Naguib Sawiris, owner of a number of businesses in Grenada, pertaining to the Maurice Bishop International Airport.  We are also aware of his boldfaced and bare-toothed desire to take ownership of this important national asset of Grenada, an asset that reflects it as a symbolic achievement of the people of Grenada.

Even more concerning was the apparent openly aggressive sense of entitlement expressed by Mr Sawiris coupled with the complicit silence by the PM Keith Mitchell.

It will be noted that an overwhelming number of Grenadians of all political stripe, and none, are united in their demand that the MBIA should not be sold.  Those of a particular age, whether supporters of the Grenada United Labour Party, the New Jewel Movement and other political movements will recall the following: –

These are the reasons why for Grenadians the MBIA is not just another airport.  It is important we stand shoulder to shoulder with one another and protect that which we have built. The Maurice Bishop International Airport, flaws and all, was the inspiration and subsequent reality of the peoples of Grenada supported by the Cubans, both in manpower and financial donations.

At no point were billionaires part of the picture when Grenadians and their comrades sacrificed, struggled and fought tooth and nail to make their dream a reality.

To have an international airport that stands to this day as one of the single most significant achievements of Grenadians during the few years of that period of history is a great testament indeed. Even the Revolution’s detractor’s cannot disagree with this fact.

How it has been (mis)managed and maintained in the subsequent years and contemporary era is another question entirely and one that should be fixed by Grenadians. It is obviously clear there is much work to do on making the airport a 1st-century facility.  Grenada – Forward Ever say that were Maurice Bishop alive today he would be the first to say “Grenadians we have work to do”.

We urge the Government of Grenada go back and fetch the lessons of the past to apply them and improve our circumstances of today.  Grenadians are not bereft of intellect, will or ability to manage the most complex of tasks and are more than able to fix whatever problems faced by the MBIA without selling this asset.

The Executive Committee – Grenada – Forward Ever